Riverside X
An Incredible Decade In The History Of Middlesbrough FC 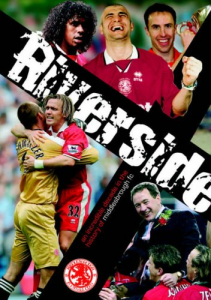 Riverside X An Incredible Decade In The History Of Middlesbrough FC

Riverside X tells the story of a remarkable period in the history of Middlesbrough Football Club – chronicling the roller-coaster decade following Boro’s move from Ayresome Park to the Riverside Stadium in 1995. There was never a dull moment in a spell that brought major silverware, four cup finals, European football and an array of international superstars to Teesside.

Mike was a key member of the team who pulled the book together, carrying out extensive research, including an in-depth interview with Boro’s World Cup winner Juninho, conducted by phone to his home in Brazil. As always, he threw himself wholeheartedly behind this project, producing work of an excellent standard that helped make the book the success it was – Dave Allan, MD of DNA PR & Publicity and former Middlesbrough FC Communications and Media Manager

The 200-page, full-colour hardback book catalogued the story of Boro’s dramatic rise, as well as the best photographs and extensive facts and figures from each season. Revealing insights were pieced together from interviews with the men who made it happen. Steve McClaren, Bryan Robson and Terry Venables – the three managers who guided Boro during the unique era – were all interviewed. There were also profiles of every player to have made a first-team appearance during the decade, from Alun Armstrong to Christian Ziege, plus the results of a series of fans’ polls carried out on Boro’s official website.