Honesty is the Best Policy
The Truth, the Whole Truth and Nothing but the Truth 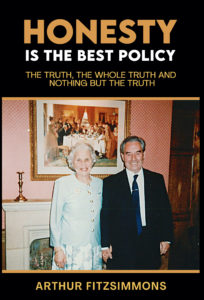 Honesty is the Best Policy The Truth, the Whole Truth and Nothing but the Truth 2021 Arthur Fitzsimmons has always believed in telling it like it is. In Honesty is the Best Policy, he gives us a warts-and-all account of his rich and full life, from being born within the sound of Bow Bells in 1925 through to meeting the love of his life, Lily, and bringing up his own family and his three grandchildren, who he adopted.

Along the way he tells us about the many jobs he did – including many years as a London cabbie, where he was given the nickname “Elf”and carried passengers including two Prime Ministers and the young Beatles shortly after their arrival in the capital.

His story is packed with fascinating tales as it chronicles almost a century of London life, including his brushes with the underworld and narrow escapes from the jaws of death. There is also deep personal tragedy, but Arthur’s cheerful outlook and wise philosophy shines through in every page.

“I’ve led a charmed life,” he says. Always willing to help anyone who needed anything, Arthur’s ninety-five years have been filled with serving others and taking each day as it comes.

I visited Arthur’s home in London to record his story, which was written with Rebecca Bevington.

*Honesty is the Best Policy is available on Amazon here