All the Very Best!
The Autobiography of a Folk Music Legend 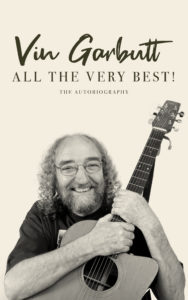 All the Very Best! The Autobiography of a Folk Music Legend 2021 It was a pleasure and a great privilege to work with Vin over four years as he told me his amazing life story.


Sadly, Vin died just after I completed the first proof. However, when they were ready to do so, I worked with Vin’s family to complete the book.

A globe-trotting trailblazer who sold out venues across the world, Vin was also a man of courage and conviction.

In All the Very Best!, he explains why he refused to be silenced despite a backlash against views that were out of line with the mainstream – and the price he paid.

The book was initially published as a Limited Edition hardback, which has now sold out.

The ebook is available from all major retailers including Amazon, where it has a five-star rating, including a reviewer who summed up by saying: “A must for all fans of folk music.”

You can also buy here from Vin’s own website, where a paperback edition is also available.