The Mystery of Mr Grebbit 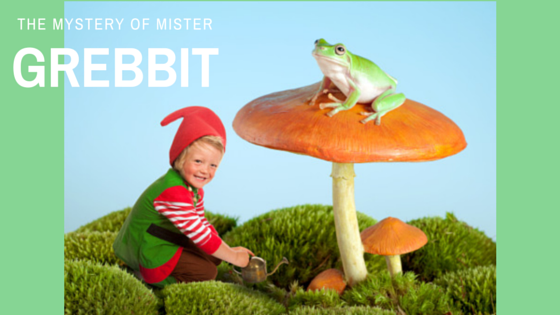 The mystery of Mr Grebbit has been solved.

Benedict was very excited when a new classroom assistant joined the staff at his nursery.

“Who’s the new man working in your classroom,” Mammy asked him.

It was a somewhat unusual name, we thought, but at the same time it seemed to suit him. Being sociable types, we greeted Mr Grebbit every morning as we dropped our little one off. Not that he seemed to be too friendly back – maybe we were being over-familiar, we wondered.

Anyway, Benedict was clearly very fond of him, so he was doing a good job, as were all the other staff. Benedict became more and more settled and was clearly making excellent progress.

Ocassionally Benedict came home wearing a reward sticker that he told us proudly Mr Grebbit had given him.

At Christmas, a friend with a toddler in the same class asked us what the male class assistant was called. She knew that unlike his classmates, Benedict took pride in remembering all his teachers’ names. We were happy to help. “That’ll be Mr Grebbit,” we confidently informed her.

But as time went on, something didn’t seem quite right. One night, some months later, I chatted with the assistant about how the day had gone.

“That’s not Mr Grebbit,” scoffed Benedict as he toddled down the path afterwards.

“That’s Mr Johnson,” he said, with that, “Dad, your such an idiot” tone perfected only by three-year-olds.

I was momentarily stunned into silence.

“But you said he was Mr Grebbit,” I eventually protested. Benedict flatly denied it. His unshakable position was that Mammy and Daddy had completely made this up and that he had absolutely no idea what we were on about.

For a while, Mr Grebbit became a household in-joke, although we didn’t actually know what the joke was, or who it was on, only that it raised a smile for all three of us. We’d regularly give him a namecheck, only for Benedict to smile and say, “Not Mr Grebbit, Daddy!” Soon he was mentioned less and less.

Only occasionally did we lie in bed pondering the day’s events and wonder once more how Benedict had got himself so confused. And we did feel a little bit guilty about passing on this information to our friend, who was still oblivious as to why one of her Christmas cards stayed on a table in the run up to the holiday break, unopened and unloved.

But today, at last, all became clear at last. Lyndsey was collecting Benedict from school when he came out with an extraordinary claim.

“Mr Grebbit did a poo on the chair!” he said, just as the male classroom assistant passed by.

With impressive awareness, Benedict saw that his Mammy was blushing in the staff member’s direction.

“No,” he said, remembering his parents’ problem with this particular issue. “This is Mr Grebbit,” he said.

At that he point to a chair. Upon it sat a baggy, green stuffed frog. After this revelation, everything started to fall into place.

There was Mr Grebbit, sitting right there. With a special reward sticker dispenser in his froggy little mouth.

View all blogs
"Mike is a talented, loyal and friendly character who helped me achieve a degree in sports journalism. I found his expert advice and extensive knowledge extremely valuable. He's not only an accomplished writer but a great guy who works hard with a constant smile."
George Friend, Birmingham City "I worked closely with Mike after I joined Boro and he played a part in helping me settle at the club so quickly. It was always a pleasure working with him and I knew I could trust him to offer honest and useful advice."
Aitor Karanka, former Middlesbrough Manager "Mike is a true gentleman who is full of integrity, honesty, humility and faith. My family will be forever grateful for his support and friendship over the years and although I was disappointed to see him leave MFC, I wish him every success in this exciting venture."
Dave Parnaby, former Academy Manager, Middlesbrough FC "Mike covered Boro and helped look after the media during an incredible 14 years in the club's history. He was always professional, welcoming and a pleasure to deal with. He's a top man and I wish him nothing but success and am sure he will go from strength to strength."
Former BBC Tees presenter Alastair Brownlee – RIP Ali, February 14 2016